29. Healthcare waste is like a bandit stealing from our future. 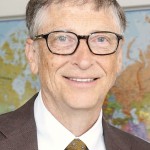 TED described this talk by Bill Gates as follows:

America’s school systems are funded by the 50 states. In this fiery talk, Bill Gates says that state budgets are riddled with accounting tricks that disguise the true cost of health care and pensions and weighted with worsening deficits — with the financing of education at the losing end.

With permission from TED and Bill Gates, we are publishing this talk as one of the Health Rosetta Principles.

Healthcare is breaking U.S. schools. Money once directed to education is getting gobbled up by healthcare’s hyperinflation. This piles onto the problem that kids don’t learn enough about health, nutrition, finance or any of the things that lead to healthy, long lives.

State budgets are big, big money — I’ll show you the numbers — and they get very little scrutiny. The understanding is very low. Many of the people involved have special interests or short-term interests that get them not thinking about what the implications of the trends are. And these budgets are the key for our future; they’re the key for our kids. Most education funding — whether it’s K through 12, or the great universities or community colleges — most of the money for those things is coming out of these state budgets.

But we have a problem. Here’s the overall picture. U.S. economy is big — 14.7 trillion. Now out of that pie, the government spends 36 percent. So this is combining the federal level, which is the largest, the state level and the local level. And it’s really in this combined way that you get an overall sense of what’s going on, because there’s a lot of complex things like Medicaid and research money that flow across those boundaries. But we’re spending 36 percent. Well what are we taking in? Simple business question. Answer is 26 percent. Now this leaves 10 percent deficit, sort of a mind-blowing number. And some of that, in fact, is due to the fact that we’ve had an economic recession. Receipts go down, some spending programs go up, but most of it is not because of that. Most of it is because of ways that the liabilities are building up and the trends, and that creates a huge challenge. In fact, this is the forecast picture. There are various things in here: I could say we might raise more revenue, or medical innovation will make the spending even higher. It is an increasingly difficult picture, even assuming the economy does quite well — probably better than it will do. This is what you see at this overall level.

Now how did we get here? How could you have a problem like this? After all, at least on paper, there’s this notion that these state budgets are balanced. Only one state says they don’t have to balance the budget. But what this means actually is that there’s a pretense. There’s no real, true balancing going on, and in a sense, the games they play to hide that actually obscure the topic so much that people don’t see things that are actually pretty straight-forward challenges. When Jerry Brown was elected, this was the challenge that was put to him. That is, through various gimmicks and things, a so-called balanced budget had led him to have 25 billion missing out of the 76 billion in proposed spending. Now he’s put together some thoughts: About half of that he’ll cut, another half, perhaps in a very complex set of steps, taxes will be approved. But even so, as you go out into those future years, various pension costs, health costs go up enough, and the revenue does not go up enough. So you get a big squeeze.

What were those things that allowed us to hide this? Well, some really nice little tricks. And these were somewhat noticed. The paper said, “It’s not really balanced. It’s got holes. It perpetuates deficit spending. It’s riddled with gimmicks.” And really when you get down to it, the guys at Enron never would have done this. This is so blatant, so extreme. Is anyone paying attention to some of the things these guys do? They borrow money. They’re not supposed to, but they figure out a way. They make you pay more in withholding just to help their cash flow out. They sell off the assets. They defer the payments. They sell off the revenues from tobacco. And California’s not unique. In fact, there’s about five states that are worse and only really four states that don’t face this big challenge. So it’s systemic across the entire country. It really comes from the fact that certain long-term obligations — health care, where innovation makes it more expensive, early retirement and pension, where the age structure gets worse for you, and just generosity — that these mis-accounting things allow to develop over time, that you’ve got a problem. This is the retiree health care benefits. Three million set aside, 62 billion dollar liability — much worse than the car companies. And everybody looked at that and knew that that was headed toward a huge problem. The forecast for the medical piece alone is to go from 26 percent of the budget to 42 percent.

Well what’s going to give? Well in order to accommodate that, you would have to cut education spending in half. It really is this young versus the old to some degree. If you don’t change that revenue picture, if you don’t solve what you’re doing in health care, you’re going to be de-investing in the young. The great University of California university system, the great things that have gone on, won’t happen. So far it’s meant layoffs, increased class sizes. Within the education community there’s this discussion of, “Should it just be the young teachers who get laid off, or the less good teachers who get laid off?” And there’s a discussion: if you’re going to increase class sizes, where do you do that? How much effect does that have? And unfortunately, as you get into that, people get confused and think, well maybe you think that’s okay. In fact, no, education spending should not be cut. There’s ways, if it’s temporary, to minimize the impact, but it’s a problem. It’s also really a problem for where we need to go. Technology has a role to play. Well we need money to experiment with that, to get those tools in there. There’s the idea of paying teachers for effectiveness, measuring them, giving them feedback, taking videos in the classroom. That’s something I think is very, very important. Well you have to allocate dollars for that system and for that incentive pay. In a situation where you have growth, you put the new money into this. Or even if you’re flat, you might shift money into it. But with the type of cuts we’re talking about, it will be far, far harder to get these incentives for excellence, or to move over to use technology in the new way.

So what’s going on? Where’s the brain trust that’s in error here? Well there really is no brain trust. It’s sort of the voters. It’s sort of us showing up. Just look at this spending. California will spend over 100 billion, Microsoft, 38, Google, about 19. The amount of IQ in good numeric analysis, both inside Google and Microsoft and outside, with analysts and people of various opinions — should they have spent on that? No, they wasted their money on this. What about this thing? — it really is quite phenomenal. Everybody has an opinion. There’s great feedback. And the numbers are used to make decisions. If you go over the education spending and the health care spending — particularly these long-term trends — you don’t have that type of involvement on a number that’s more important in terms of equity, in terms of learning.

So what do we need to do? We need better tools. We can get some things out on the Internet. I’m going to use my website to put up some things that will give the basic picture. We need lots more. There’s a few good books, one about school spending and where the money comes from — how that’s changed over time, and the challenge. We need better accounting. We need to take the fact that the current employees, the future liabilities they create, that should come out of the current budget. We need to understand why they’ve done the pension accounting the way they have. It should be more like private accounting. It’s the gold standard. And finally, we need to really reward politicians. Whenever they say there’s these long-term problems, we can’t say, “Oh, you’re the messenger with bad news? We just shot you.” In fact, there are some like these: Erskine Bowles, Alan Simpson and others, who have gone through and given proposals for this overall federal health-spending state-level problem. But in fact, their work was sort of pushed off. In fact, the week afterwards, some tax cuts were done that made the situation even worse than their assumptions. So we need these pieces.

Now I think this is a solvable problem. It’s a great country with lots of people. But we have to draw those people in, because this is about education. And just look at what happened with the tuitions with the University of California and project that out for another three, four, five years — it’s unaffordable. And that’s the kind of thing — the investment in the young — that makes us great, allows us to contribute. It allows us to do the art, the biotechnology, the software and all those magic things. And so the bottom line is we need to care about state budgets because they’re critical for our kids and our future.